Keyhole Falls is one of the heaviest waterfalls to ever be descended by kayak.

Keyhole Falls are located along the Lillooet River in Pemberton, Canada. It is 115 feet high and it gets its name form its shape because it resembles a giant old-fashioned keyhole. It is also one of the most significant waterfalls in southern British Columbia by volume. 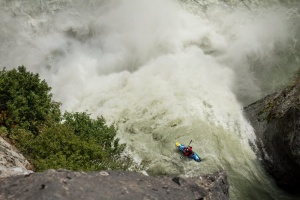 Pro kayakers Aniol Serrasolses makes and expedition to run the Keyhole Falls. The first attempt was called off due to excessive water flows, the second attempt happened in a very precarious way as the risk of a lifetime due to communications problems.

Watch the video below that chronicles the preparation and actual plunge.

Watch this amazing video with sub-captions by clicking the CC while playing.