Robert broke a number of rules for Kayak Fishing.

It only takes a few seconds to find yourself in perilous conditions, so it is important to not get distracted. Robert got distracted looking for his anchor  which caused him to lose the required focus and he found himself in the water for as he says” the longest 3 minutes in his life”. 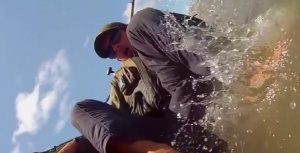 He never had to re-enter a capsized kayak before, fortunately he was wearing his PFD (Personal Flotation Device).  Every kayaker should be well practiced in deep-water re-entry.

Watch Robert get taken for a ride …

Robert is taken out to sea by a large shark and later manage himself through predicaments.