Would you believe that the number of serendipitous whale piggy back rides has been on the increase as of late.

To her surprise, photographer Robyn Malcom found these amazing pictures among the many photos she took while photographing feeding pods of whales off the coast of Sydney, Australia. 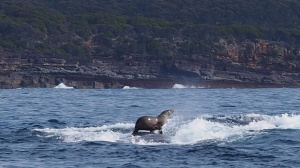 Robyn was about 300 miles south of Sydney when she captured these photos.  Seals and whales are not naturally friendly species, so this behavior is somewhat surprising.

In fact this behavior is so surprising that the authenticity of the photos was brought into question.

Watch these amazing photos in the video presentation below

Watch  this amazing clip below

Read on for more details about this photo-opp.

“We’d seen some amazing whales coming out of the water, everything was happening so quickly. And it was when I went back through the photos that I realised I had actually captured the seal on top of the whale.”
Advertisement

NSW National Parks and Wildlife whale expert Geoff Ross said the coupling was highly uncommon, though he had heard of it happening once before.

“The only other time was a seal trying to get away from a killer whale … the seal hopped on the back of the pectoral fins of a humpback whale,” he said, adding that Ms Malcolm’s photos depicted a very typical humpback feeding